How to Gamify Your Habit Tracking in Notion

The gist: I gamified my habit tracking in Notion. And in this post, I'll take you through the Notion template so you can do the same.

The hardest self-care activities, at least for me, are usually the most basic habits, like getting enough sleep, drinking enough water, and remembering to eat breakfast before I dive into my day.

I might not be good at those things, but I am good at playing games.

So to use that to my advantage, I gamified my habit tracking in Notion. And in this post, I'll take you through the Notion template so you can do the same.

Here's the video version (scroll down for the text version):

Subscribe to the Work Brighter YouTube channel for new videos weekly
table of contents
About the Notion habit tracker
How the Gamification Works
Inside My Gamified Notion Habit Tracker
Scorecard View
Daily Habit Tracking
Habit Gamification Formula
Keeping Up with Habit Tracking
Gamifying My Life, One Habit at a Time
And if you liked this post, you'll also love:

About the Notion habit tracker

Since I've started Work Brighter, I've encouraged people to explore how systems traditionally thought of for productivity only can be used for things like self-care and fun as well.

As I like to put it, systems can be self-care.

Notion templates and other project management tools are a fantastic example.

So is habit tracking.

And this Notion habit tracker combines all of it.

Here's how it works:

If you've checked out my productivity toolkit, you know I mentioned two separate habit trackers.

The one on my phone only has the habits for what I like to call a "minimum viable day." It only has the things I absolutely have to do each day, like eating and brushing my teeth.

But actually getting work done and having a good day? The stuff beyond that minimum?

That is where my Notion habit tracker comes in.

And it's incredibly fun and amazing, if I do say so myself.

Before I show it to you, let me explain the theory behind it.

How the Gamification Works

The habits are weighted so that each falls into one of three tiers.

And the habits in each tier are worth a different number of points.

And in addition to being tiers of habits, there are tiers of success.

I have one formula that totals up the score automatically, and another that gives me a rating emoji based on that.

My goal every day is to get a score based on my minimum viable habits, but then there are other ratings for going above and beyond.

Now that I've explained how it works, let's dive in and see what this Notion template looks like.

But real quick I want to mention:

If you like this idea but don't want to figure out how to build your own version, you can grab the template through the Work Brighter With Notion Toolkit.

Inside My Gamified Notion Habit Tracker

Like usual, we'll start with the database view I use most. I love simple list views like this, and this one just has the date and the overall habit rating and the score translated into a percentage. 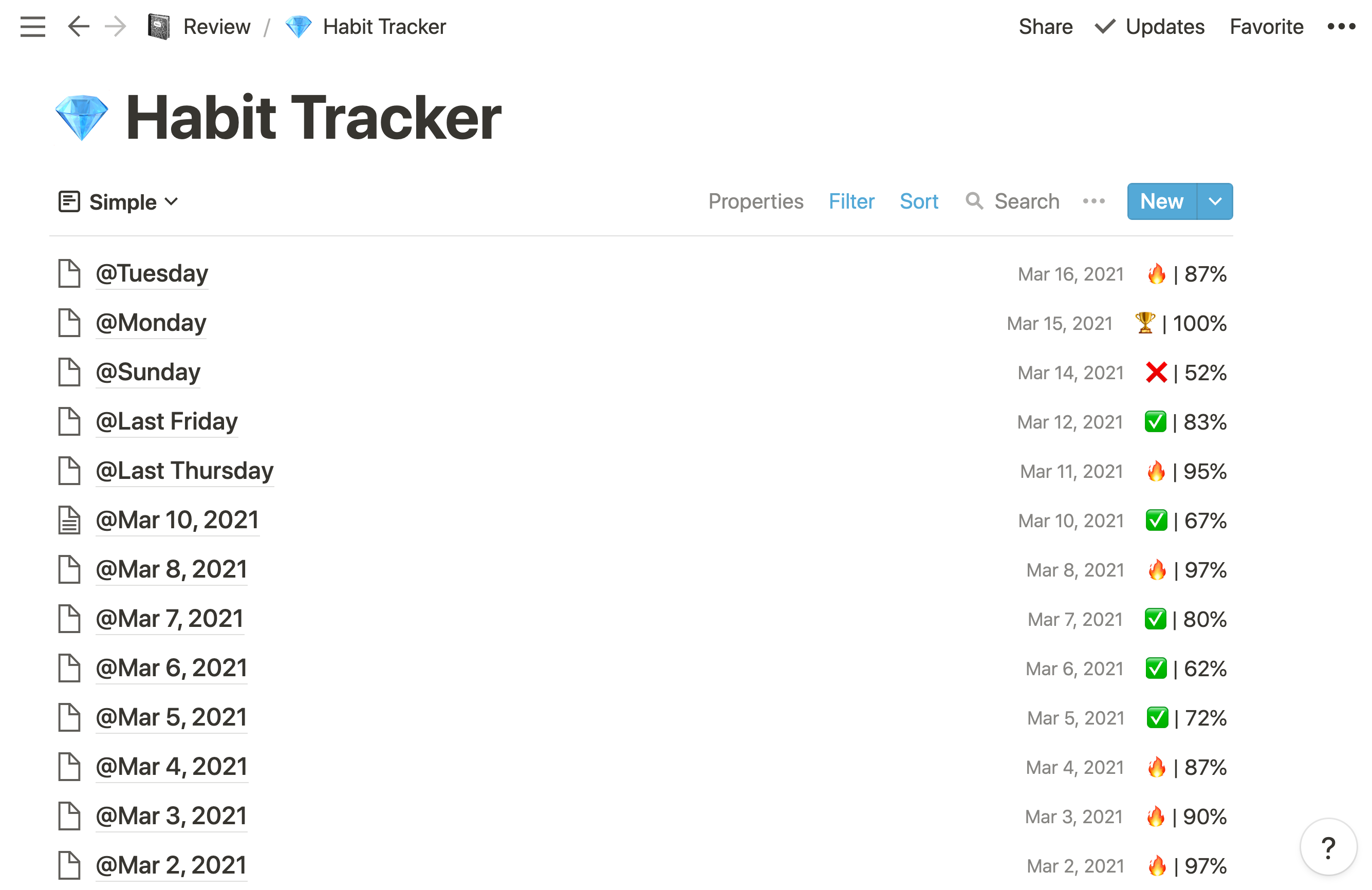 And you can see the different ratings based on how high the percentage is.

There's also a trophy for having a perfect day, but it's hard to have a perfect day in a panini, so there haven't been any of those lately. ¯\(ツ)/¯

To make a new entry for a new day, I just click new, and do the quick setup I talk about in the walkthrough of my daily journaling routine. And then as I go about my day, I just check things off and see the updated score.

The are roughly organized by tier in the main database.

So the ones higher at the top, like taking my medication, drinking water, and moving around enough, are the more important things that are worth 5 points each. 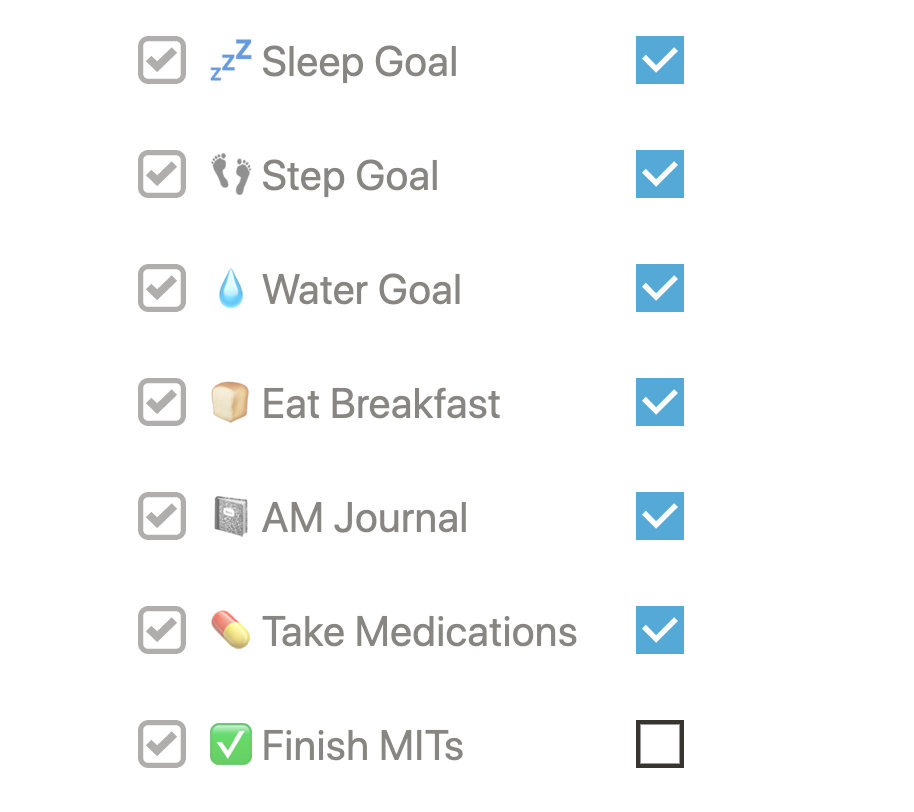 The more productivity focused stuff like finishing my most important to-dos for the day and hitting my word count goal are in the middle and worth 3 points. 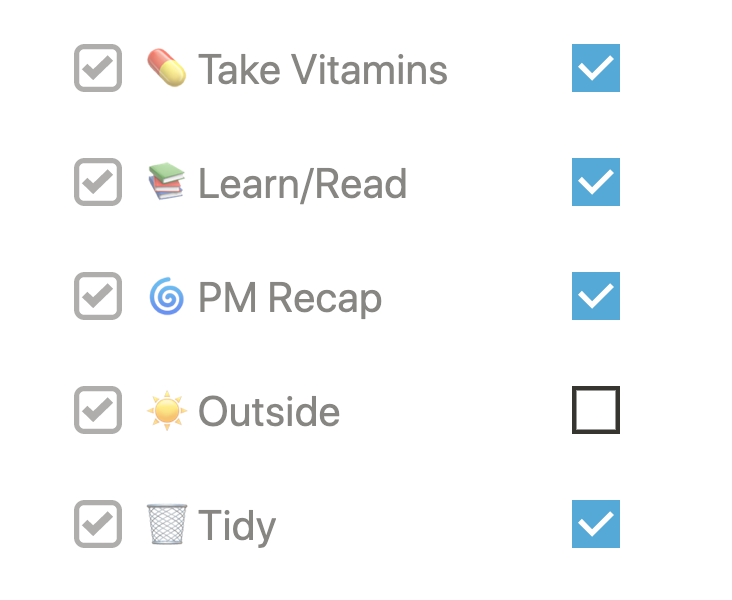 And finally there are bonus things like remembering to spray leave-in conditioner in my hair between wash days, remembering to floss, and publishing new content. 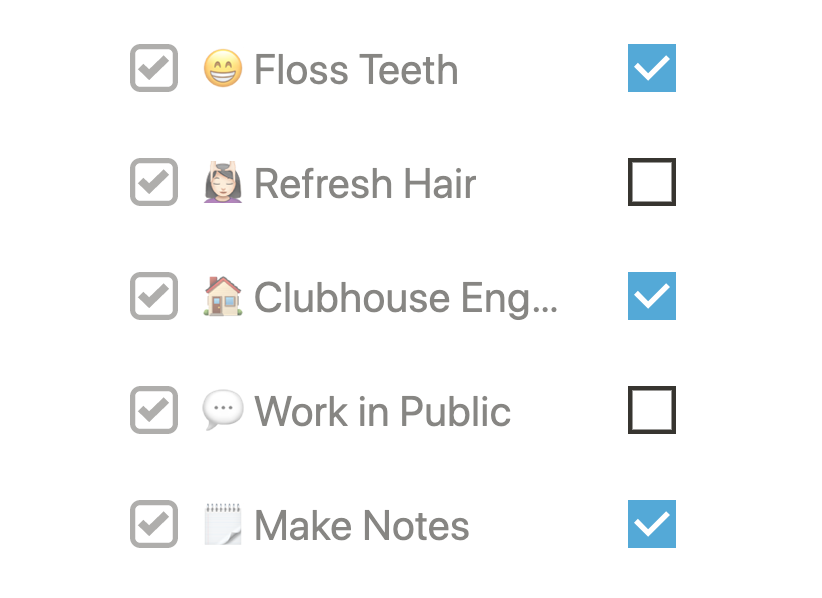 So that's how it works on the front end - super simple. It's on the back end or behind the scenes where the magic happens.

Let's take a closer look at the formulas. 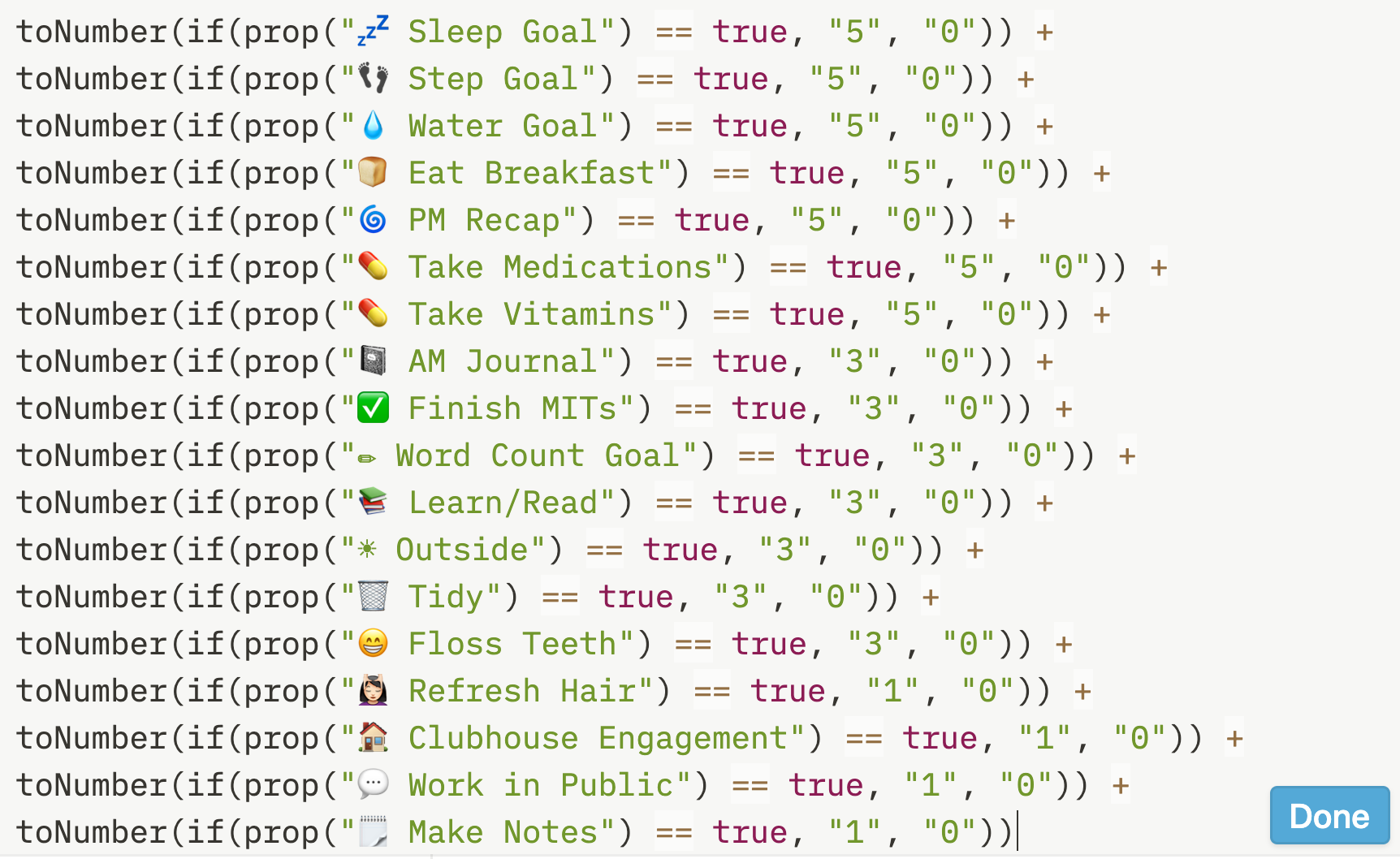 The score calculator is the more complicated one. Honestly, it used to be broken up into like, a dozen separate formulas because I didn't know how to combine them all yet, but was able to streamline it as I improved my formula skills.

And it's long, but it's really all the same thing over and over. It looks at each field and says, if it's checked, add the right number of points, and if it's not, add 0. And it's just that over and over again for each habit and the number of points associated with it.

Then the rating formula takes that sum, and says if it's less than 35, because I have 7 primary habits worth 5 points, the rating is an X. Otherwise, it's either a check for a good score, a flame for a great score, or a trophy for a perfect score. And then in addition to the emoji, it also calculates a percentage.

Keeping Up with Habit Tracking

I mentioned how I have the database views set up in the original database.

But the beauty of Notion is that I don't actually ever need to navigate to it.

In my Notion daily journaling routine video, I show you how it's embedded into the template I use for daily journals.

A summary version is also in my weekly and monthly reflection dashboards, and there's a quick link to it on my dashboard's homepage.

Then on my iPhone, I also have an iOS Shortcut that opens Notion straight to my habit tracker using deep linking, and one for my daily journal as well. And those are both added as icons to my homescreen so I can get to them quickly on the go.

Gamifying My Life, One Habit at a Time

Alright, that is the gamified Notion habit tracker I've been using for like two years now.

And I love that it brings me one step closer to my ideal state of living as a Sim. Not like, a general simulation but a sim from The Sims specifically.

If you don't know what I mean by that, check out my video on what The Sims taught me about self-care next.