Why Notion is Better Than LEGOs

Before we get into it, I wanna let you know that if you love Notion, I have a template bundle you might want to check out to help you use the app to Work Brighter!

And since I’m gonna be talking about that bundle and Notion a bit over the next few weeks, I wanted to get one thing out of the way first:

Why I love it so damn much.

I’ll admit it. It’s not unusual for me to geek the freak out over a new productivity app….

But that journey for me with Notion has been totally different, even if it looks the same from the outside.

Notion has been the tool that has most drastically changed my daily workflow, that has solved the most problems in my systems, and that has enabled the most frictionless work for me.

And while I don’t necessarily believe that there’s “one tool to rule them all,” and have no desire to ever streamline down to just using ONE app for my work…

And if I had to sum up why I love it in just one sentence it would be this:

Notion is like Legos. But better, because you can’t accidentally step on it and ruin your whole day.

Other apps like this – let’s just call them general work organization apps – usually go one of two ways:

Either they give you a pre-built house, like a project management tool or a calendar, and the only customization you can do is to customize and decorate within what they’ve provided.

Or, they give you literally nothing, and your only choice is to start with a completely blank slate. With them, you’re not just building the house brick by brick, you’re also producing the bricks and chopping down the trees for all of the wood. Ugh, so much work.

Notion, however, hands you a bucket or Lego kit of building blocks in different shapes and sizes and says, “create what you want or need. Have fun!”

It’s the happy medium, or as we like to say in the Work Brighterverse, the sweet spot.

This is perfect for someone like me, who’s always had trouble “fitting” their brain into the shape of other productivity and work tools.

I don’t know how many times over the years I wished I could just design my own to-do list app, or content calendar tool, or habit tracker. How many times I would find someone else’s solution that would come SO CLOSE to working how my brain did…except for one or two things.

And those one or two things…across all of the apps I used in a day…add up.

So as great as the other tools were, it was still stressful and annoying that they were out of alignment with my brain.

But with a Lego productivity tool, it’s easy to customize things to exactly how your brain wants them (or almost exactly).

And it’s usually just as simple as rearranging a few blocks, unless you wanna do more.

Another great aspect of Notion is that you can choose how much you want to customize.

It’s like buying Lego bricks that let you create your own design vs. one of the kits of a pre-designed scene (I love the Central Perk one my sister has

If you’re a builder and a tinkerer, like I am, you can build your perfect-for-you Lego dream house from scratch.

There are tons of “pre-designed kits” and “starter sets,” like templates or pre-written formulas.

Both official ones in the app and ones built by members of the community (ahem, like moi).

And with those, you don’t have to build from scratch.

You start of with something pre-built and close to what you need, and can just make a few tweaks to personalize it.

A more personalized tool than you’ve ever used before, without building something totally custom.

It’s the best of both worlds! 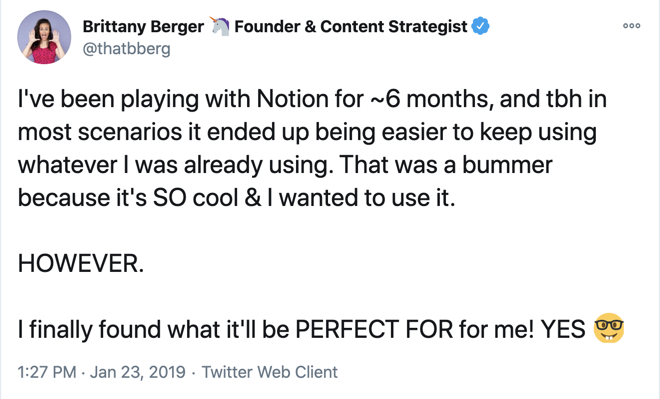