The 5 Stages of Hustle Culture Divestment

The gist: divesting from hustle culture mindset is an intense journey. Here are five stages of it that I've noticed in my coaching and community work. Which stage are you at?

It's surprising we expect it to be, given that we're indoctrinated to it over the course of a lifetime.

After that much time, internalized capitalism, workaholism, and productivity dysphoria isn't something you can "just shake off" in a weekend or two.

(If only! That would be so much easier.)

Instead it's more of a journey or process to a faraway destination.

After spending the past 5 years unlearning my own Hustle Culture mindset and helping other people do the same, I've noticed a few common phases most of us seem to go through.

Here are those stages: 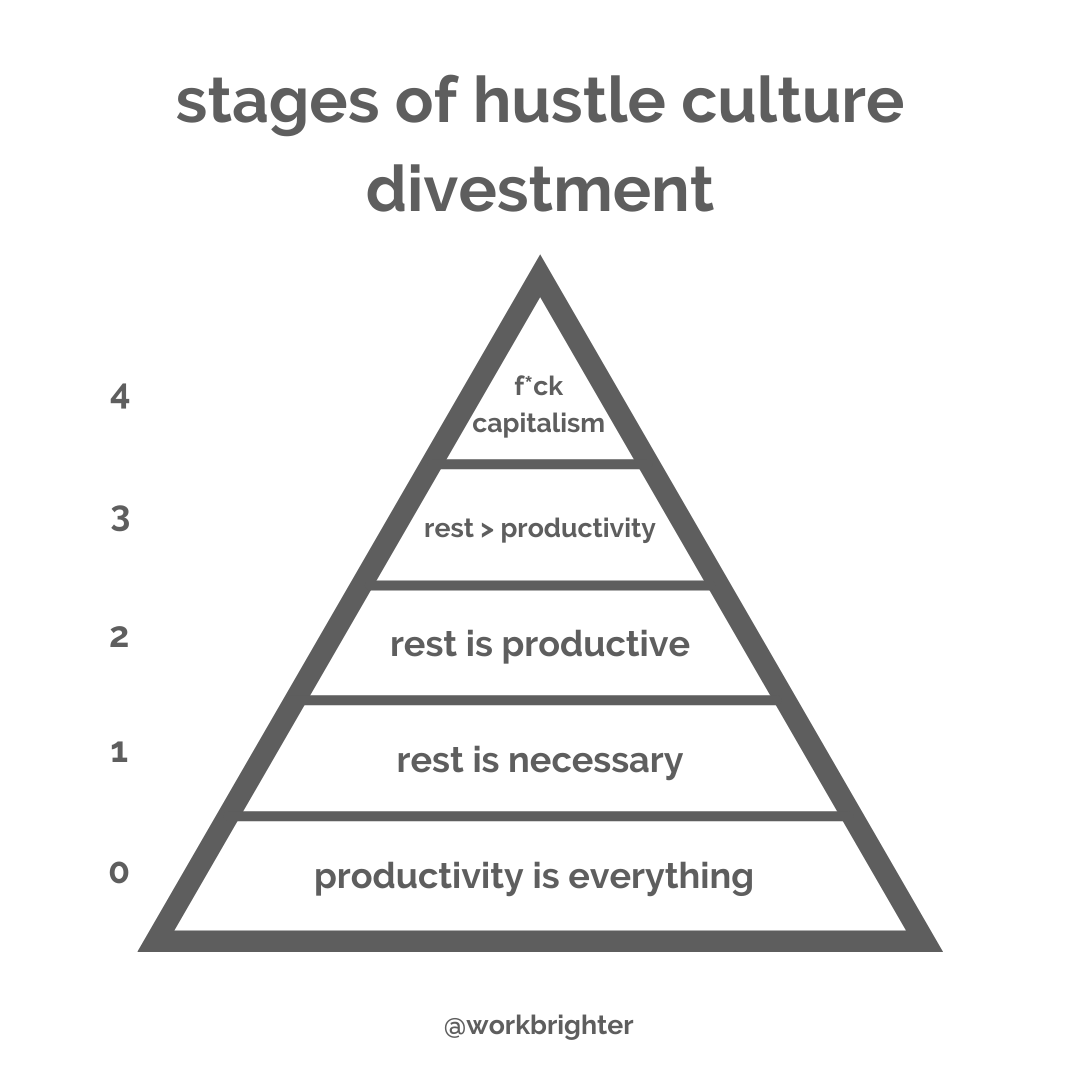 This is where we start before we start unlearning Hustle Culture and still believe in the power of hustle and meritocracy.

It's believing that you just need to put in the good ole Protestant Work Ethic to pay your dues, and you'll be rewarded with the American Dream.

These are the messages we receive from society since birth.

What we're told by our teachers and parents.

It's particularly prevalent in America, of course, but at this point the impact is global.

At stage 0, you don't see any value in rest or self-care. In fact, you likely even resent it.

You deny any problems with your boundaries or balance.

Work is everything, end of.

Sign up to get weekly tips and stories to help you create your OWN definition of productivity working better and brighter outside of Hustle Culture.

The first stage of divesting from Hustle Culture and internalized capitalism, in my experience, is starting to see the value in rest.

Usually, this comes in the form of realizing that "rest can be productive." 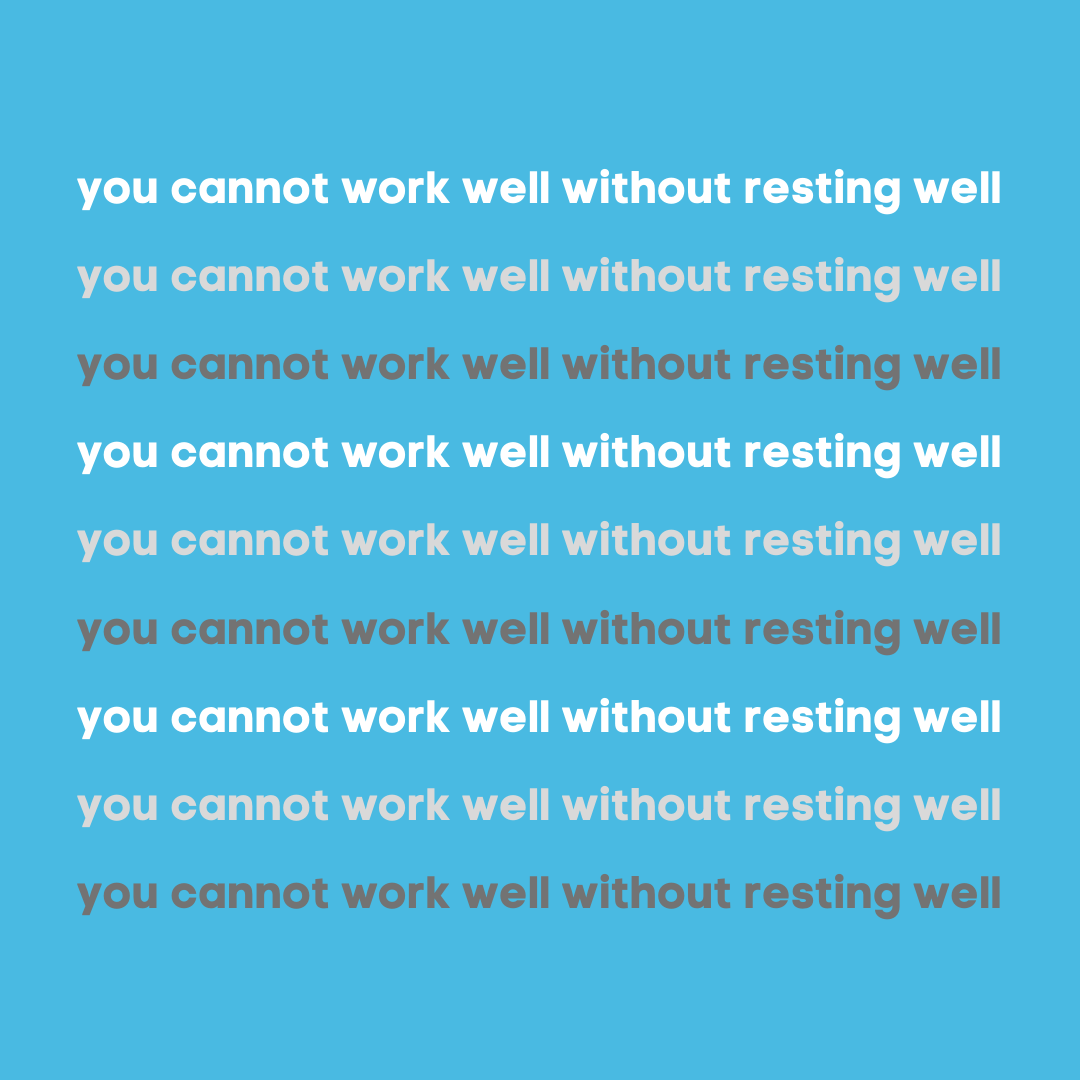 For example, realizing that there's a point of diminishing returns when it comes to your work hours. That working more doesn't make you more productive.

When you're still a workaholic, hearing that your work quantity is damaging your work quality tends to be a wake-up call.

Here's how I explain it to people I'm trying to get to Stage 1:

"You care about your work, right? You want to do your best work possible? Then after 40 hours (or less), the best thing you can do for your work is rest."

I also explain to them about the incubation phase of creativity and the importance of giving your work time to "marinate" in your brain juices for a bit.

And while realizing that rest is productive isn't fully divesting from Hustle Culture, it is what begins the process for so many of us.

Once we start looking at rest more closely, we tend to notice things about it other than its benefit to our productivity.

That when we work less, we feel healthier, have better relationships, and more.

Once we start working less and placing value on that non-work time, and seeing the things that replace it, we tend to begin rethinking other workaholic habits as well.

All of this helps us realize that something can be valuable without being productive, rest included. That there are types of value in life other than capitalist value, and things matter other than our careers.

This is an exciting stage!

It's when we begin exploring new interests and activities and dreaming about new ways to spend time.

Even if you don't have the resources to explore those interests yet and actually turn them into hobbies, you start to dream.

You become more than your job.

Sometimes it's for the first time in years.

By now, you’ve been changing your relationship to work enough that you’ve gone from, “rest is valuable because it’s work,” to “rest is as valuable as work.”

Yes, you still see rest as part of the productivity process, but...

At this point, you start better understanding how Hustle Culture and the relentless pursuit of productivity play into the exploitation of us by capitalism.

And how part of that exploitation is convincing us that all we need is work.

You may not actively resent work and capitalism yet, but you are becoming disillusioned as you shake yourself of Hustle Culture’s last grips on your mindset.

Finally, at the final stage, you can confidently say, “fck work, fck capitalism, bless rest” with your whole heart.

Unfortunately, you’re not actually free of capitalism until we all are.

But you are fully free of the mindset that makes you glorify it, see it as necessity, and tie your value to your place within a capitalist system.

You’re free of its hold on you, its brainwashing, its hypnotizing.

And that’s necessary to help others do the same and actually dismantle the larger system.

So which stage of hustle culture divestment are you at?

Divesting from Hustle Culture is definitely a process. Its values are something we learn since we’re old enough to walk and talk.

Plus, few people around us think to question it. Although that seems to be changing and I’m excited.

As it does, I think these levels or stages can be helpful for identifying our own journeys.

So think about what stage you’re at now, and what the other stages looked like for you.