The Thing About Girlboss Feminism (and the Essays Critiquing It)

The gist: This is nowhere near the first piece on girlboss culture or girlboss capitalism, but I wanted to talk about a few things those miss...

This is nowhere near the first piece on girlboss culture or girlboss capitalism, but every time one of those essays is published, here's what happens:

Because none of those other pieces written, great and interesting as they are, touch on the things that frustrate, fascinate, and enrage me most about girlboss culture.

I'm still waiting on a thinkpiece about the word girlboss that actually looks at *why* women identified with that phrase in the first place, instead of just saying "there's no boybosses!" (Hint: the gurus, ninjas, and rockstars are worse than boybosses anyway)

The only three critiques of it that came anywhere close to hitting the mark for me were:

So, satirical and comedic ones. Not even serious ones.

So after years of saying, "I just need to write a version of my own..."

And publishing snippets of something across social media over the years...

This is that version. This is my attempt.

Girlboss Feminism is Hustle Culture in a New Flavor

The main reason other girlboss culture essays miss the mark for me is because they focus on one particular subgroup of girlboss culture, usually famous women CEOs or debt-ridden MLM reps, instead of looking at the ecosystem as a whole.

You can't paint all girlbosses with the same brush.

Instead, you have to look at it as its own micro economy, with winners and losers.

In a hierarchy that...uhhhhh...looks a lot like a pyramid, which should tell you how much to trust it. 🙃

And even the girlboss economy is part of a larger one, and most of its problems are inherited from that, not unique to girlbosses. 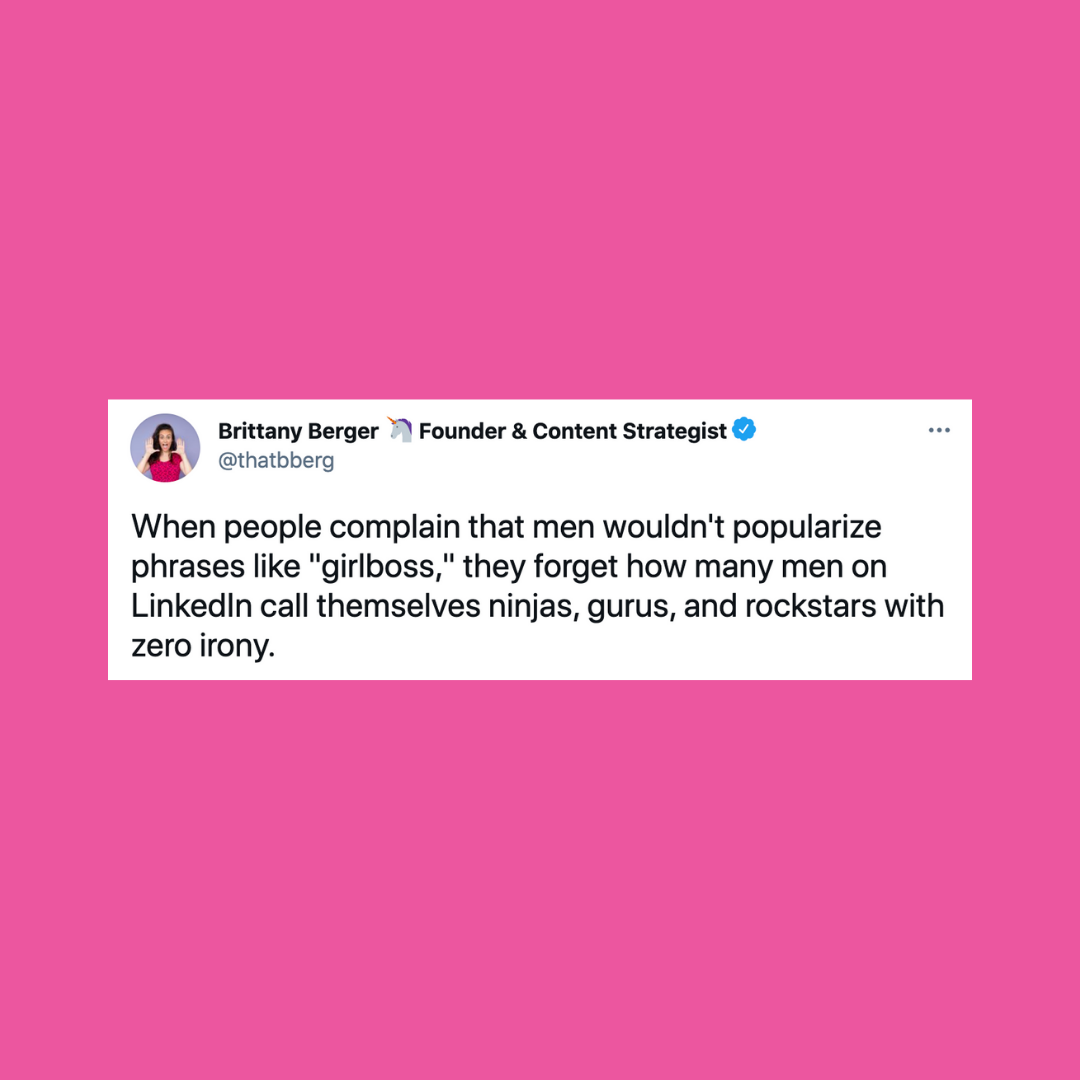 So just as overfocusing on one level of the girlboss hierarchy is incomplete, so is anything that acts like most of the BS that goes on with girlbosses is unique to this archetype.

Most of the girlboss mindsets, like "work hard and you'll be rewarded," "rest is weakness," and "if I can do it, you can do it too," are just purplewashed Hustle Culture and late-stage capitalism.

Those girlbosses didn't come up with the pithy sayings on their Instagrams themselves.

They're repackaged from the Hustle Culture bosses, "gurus," and "ninjas" that came before them. The Dale Carnegies, Steven Coveys, and Tony Robbinses.

(I find these self-proclaimed gurus and ninjas worse than girlbosses anyway...the terms are equally cringey AND had the added bonus of cultural appropriation!)

And just like in Hustle Culture, the people at the top of the hierarchy commit the most harm, while scapegoating the people below them, whose biggest mistake was simply believing the BS peddled by their mentors.

That's why I have a big problem with people who spend more time hating on the struggling women entrepreneurs and MLM reps calling themselves girlbosses, than they do the system that created them and the more willing purveyors of it at the top.

People who never wonder why the phrase girlboss resonated with so many people in the first place, and what kind of oppression and power struggles are at play there.

Working brighter is about doing more than working smarter and obsessing over productivity and Hustle Culture.

It's about personalizing productivity and life advice to your own situation instead of following other people's frameworks.

Girlboss Culture is a Pyramid

Like I mentioned before, the girlboss hierarchy is a pyramid...a scam where the people at the top exploit the people "below" them.

But so many other essays on girlboss capitalism flatten the hierarchy.

Treat all girlbosses the same.

The MLM rep is portrayed as having the same motivations and experiences as the venture-backed CEO.

That's not how it actually plays out.

If there's one thing I've learned from my obsession with scam podcasts like Scam Goddess and Scam-Wow, it's that a scam always has multiple players. And the roles aren't always as clear-cut as "scammer" and "scammed."

The same is true of the Girlboss Ecosystem.

A lot of commentary on it focuses on the scammer: the privileged white feminist hiding her quest for power behind girlbossing, "women supporting women," and pseudo social justice language.

(These are the CEOs that left their companies in June. 👀)

Or it focuses on the ignorant victims like MLM reps who believe that buying their products truly supports women-owned businesses, more than the usually-male CEO of the company they're "multileveling" for.

I don't snark on women who resonate with the phrase "girlboss" like other entrepreneurs often do, because my stance is that they're being scammed by the larger system at play.

If a woman entrepreneur is loudly proclaiming "I'm not a girlboss" while still feeding into the larger systems of Hustle Culture, that irks me. It feels like Pick Me Girl behavior that demeans other women in the name of patriarchal beliefs about work.

But then there are also the people in the middle, the accomplices, whether willing or unwilling. The people that play into the system without realizing it's a scam, or even that it's there.

And the reason I know those overlooked players are there because it's where I fell into the system. The willing ones don't deserve sympathy, but not everyone perpetuating girlboss culture knows they're doing so.

That's how scams work. They're the patsies.

Here's the usual cast of characters:

At the top are the queen bee girlbosses.

These are famous women CEOs that quietly stepped back from their roles in June 2020. The one that coined the term girlboss.

They know what's going on. That they're manipulating people, using people, and being harmful. They just don't care.

And they deserve critique for that.

Working brighter is about doing more than working smarter and obsessing over productivity and Hustle Culture. It's about personalizing productivity and life advice to your own situation instead of following other people's frameworks.

In addition to the queen bees, we have the skeptics. This is where I'd place Annie in Shrill and Leigh Stein (author of Self-Care: A Novel), along with myself and friends like Maggie Patterson.

We're people who saw holes in the fabric the queen bees were weaving, even if we might have wanted to believe them (just speaking for myself here!).

Frequently, we find ourselves half-in, half-out of the girlboss culture.

For example, in my case, I fully admit I was seduced by a lot of the girlbossy stuff when I first started my business.

I considered myself a feminist, but honestly didn't know that much about feminist politics or theory yet.

That not-yet-deep-enough understanding of feminism was PERFECT for the shallowness of the girlboss movement to grab onto.

I followed the girlbosses. I bought their courses. I started my business trying to mimic their business models, language, and mindset.

But as I did, the problems with girlboss feminism became clear, and I was able to get out of that space before I got too deep.

I never got so inside the girlboss capitalism system that I couldn't see the ecosystem clearly.

And that's why I feel like I can see the bigger picture, but some of my friends are missing the forest for the trees.

Finally, moving our way down the pyramid, there are the people really being duped.

The dare-I-say desperate women like the ones Annie met in the bathroom on Shrill.

Women who are just so starved for a tiny bit of confidence, support, and power, that they're oblivious to the Queen Bee's scams for more power. Because she makes them feel like they have it.

I'd place most MLM reps in this category, the ones without their own "downlines."

Along with people going through a career crisis and instead of ending up with a career coach, they end up with a "mindset" or "empowerment" one pretending to be an experienced mentor.

My final big complaint with girlboss feminism is a common one: that it glorifies capitalism. But I want to speak about it from a specific angle.

Putting it that way is still glorifying capitalism and trying to wield superiority over other people.

It's still admitting to realizing the inequalities of capitalism, but then instead of saying, "that's some fucked up game," saying, "I'm gonna win that game!"

Being a "boss" is about collecting power and ownership, upholding hierarchies, and leveraging imbalances of power.

Think about it: to be a boss, you have to be the boss of someone else.

Your power and confidence comes from their lack of it.

Think about phrases like "employee mindset vs boss/entrepreneurial mindset," and how messed up they are.

Being a boss doesn't make you a better person. And honestly, if we look at the stats, we might find it's more likely to make you worse.

Most of the "boss" and "entrepreneur" mindset stuff you see online is encouraging pretty gross behavior.

So just because someone doesn't use the term "girlboss," doesn't mean they aren't one.

Most of the people who most loudly talk about not being a girlboss, and critiquing the word? STILL HAVE THE SAME PROBLEMATIC MINDSET.

They just want you focusing more on how much power and superiority they feel.

Working brighter is about doing more than working smarter and obsessing over productivity and Hustle Culture. It's about personalizing productivity and life advice to your own situation instead of following other people's frameworks.

They're both new ways we've been taught to internalize capitalism.

So when we redefine productivity, poke holes in the capitalist mindset, and refuse Hustle Culture together, all the girlbosses will lose their power with it.