The gist: We've been taught to avoid boredom at all costs, but it enables so many important mental processes, including creativity. The book Bored & Brilliant looks at how to reclaim it.

"You have to let yourself be bored to be brilliant."

But until I read this book, I didn't know you needed to be bored to be brilliant, too.

"You gotta be bored to brilliant, in the right measures.

Bored to be brilliant, it's a very good sign.

Bored to be brilliant, means that you love you babyyyy!

You gotta be bored to be brilliant."

I was interested in this book, Bored & Brilliant: How Spacing Out Can Unlock Your Most Productive and Creative Self, for a few reasons...

I'd seen the accompanying challenge, the Bored and Brilliant Challenge, called anti-digital detox, which I consider myself as well.

People have long marveled at how infrequently I seem or talk about being bored. And I agree with them, I don't think I'm bored much.

So I used to reply to comments like those with self-deprecating jokes about being easily entertained.

But books like Bored & Brilliant have helped me see it differently.

And maybe it's just one more way I haven't internalized the attention economy of capitalism, as How to Do Nothing talks about.

And books like these have helped me own that.

So let's take a look at what Bored & Brilliant says...

We've been taught to avoid boredom at all costs, but it enables so many important mental processes, including creativity. The book Bored & Brilliant looks at how to reclaim it.

Note: Some of these links are affiliate links. So if you decide to buy anything, I'll receive a commission. Most creators say something like "100% of this goes back into the business," but I'm not most creators. Some months it goes into the business, others it will be used to buy inappropriate amounts of chocolate. Remember, working brighter is about balance!

table of contents
The Case for Boredom
What We Mean When We Talk About Boredom
Dopamine & Digital Overloads
Phone Hygiene & "Out of Sight, Out of Mind"
Making #Content or Making Memories?
App Addled & The Attention Economy
Boredom & Doing Deep Work
Gamification and Reclaiming Wonder
Wander Away
What's Next
And if you liked this post, you'll also love:

The Case for Boredom 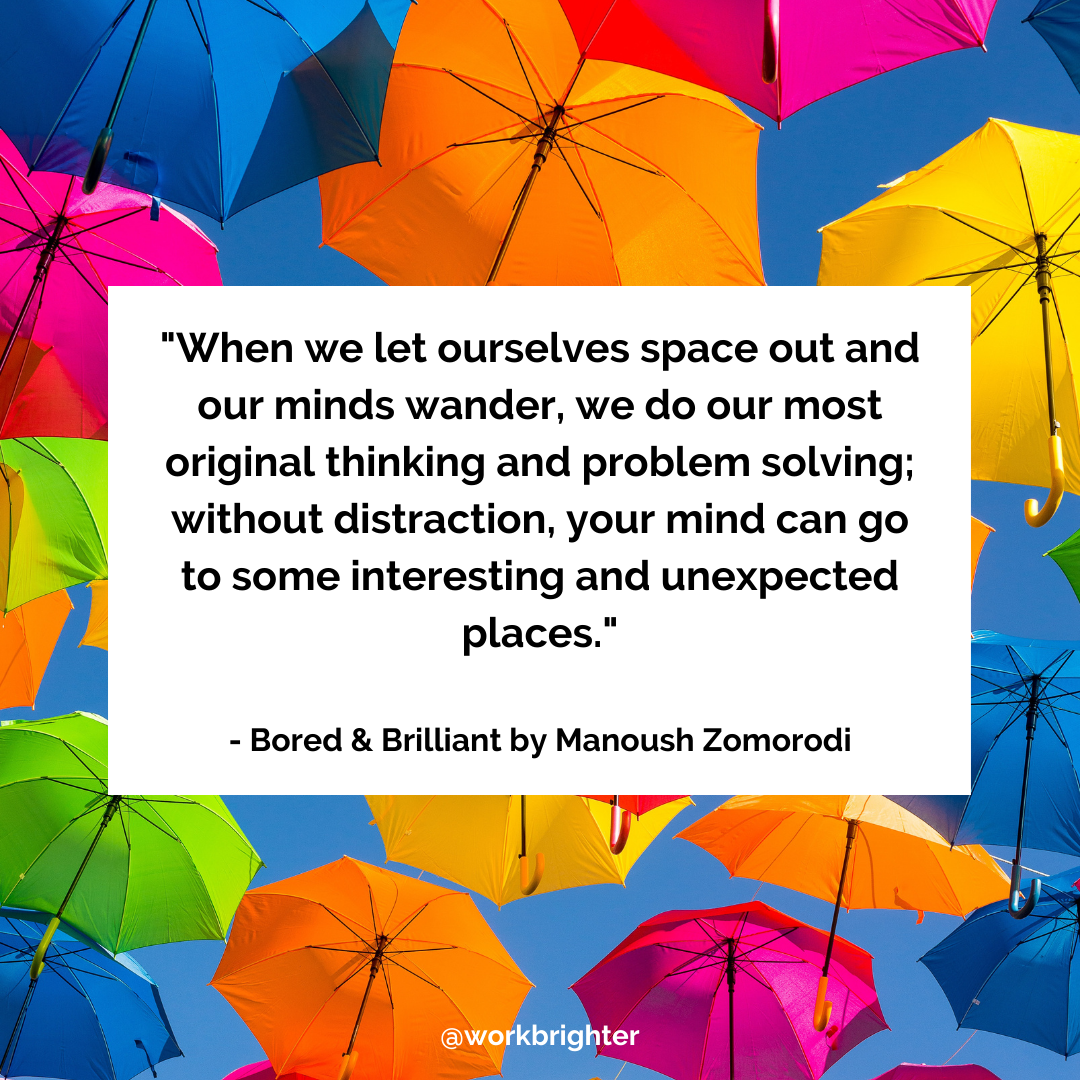 We're taught that boredom is bad, a negative state to be in. We've gone to great lengths to avoid it.

But "boredom," or letting mind wandering take over, is actually an incredibly important mental state.

When our minds wander, the default mode (also called the imagination network, and guess what it does? 😝) is activated. That network is what controls processes like creativity, autobiographical planning, and empathy.

This is why our best thinking and problem solving, the stuff that leads to the most personal and professional growth, happens when we let ourselves space out, like on a walk, in the shower, or trying to fall asleep.

And that's how the constant stimulation of an always-on and always connected world can be detrimental. We're not letting ourselves get into that state as frequently.

So to combat this, the book's thesis is that we need to learn to be mindful about how we connect to the world and stimulate ourselves.

What We Mean When We Talk About Boredom 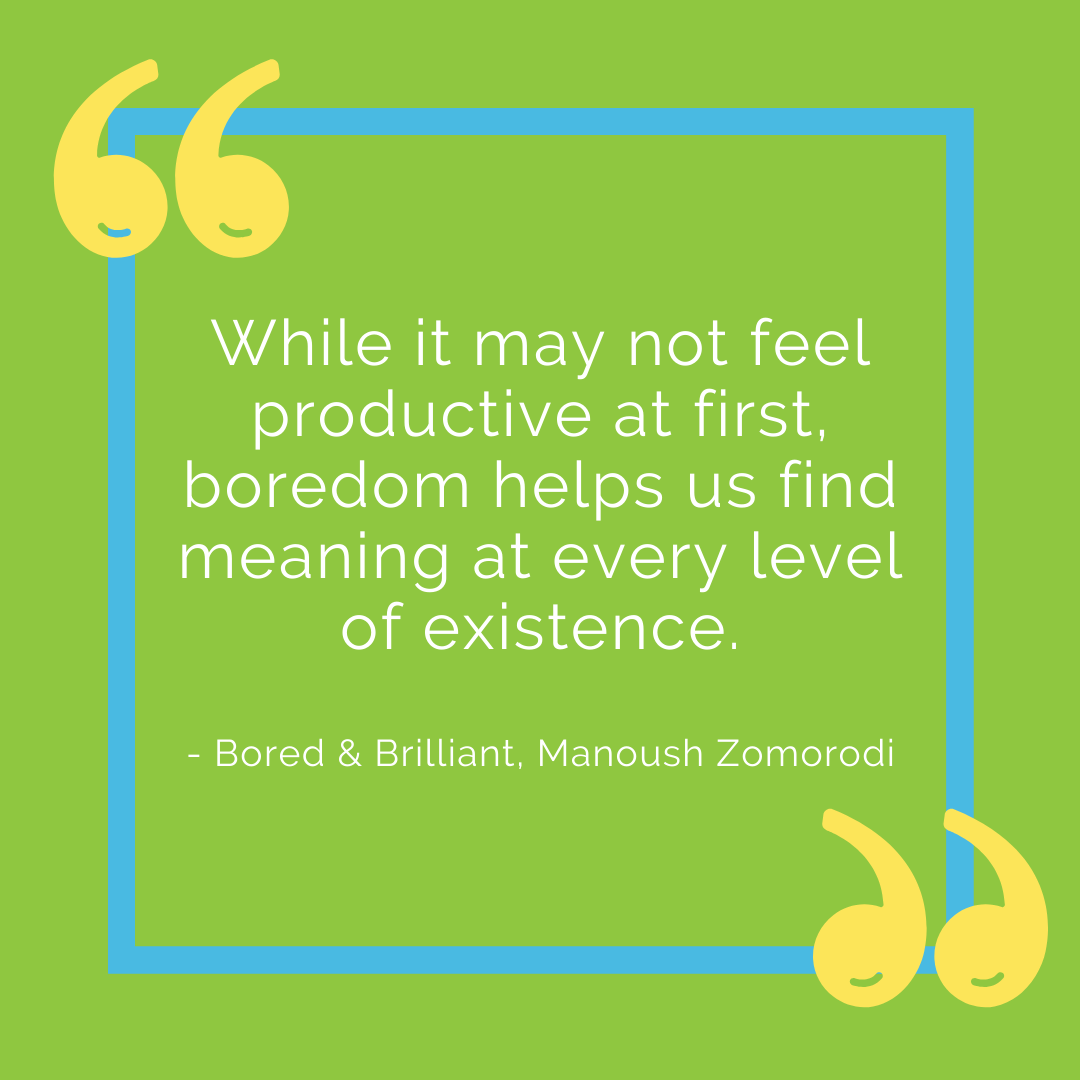 While the sensation of boredom isn't new, the term itself is tied to the Industrial Revolution (like much of Hustle Culture).

Before this term, ways to describe the feeling included depression, existential crisis, nausea (Sartre), restlessness, ennui, noonday demon, idle (Kierkegaard), etc. A good way to put it, if you watch The Good Place (which you should), is that a lot of Chidi's heroes spoke or wrote about boredom. 💁🏻‍♀️

Some kinds are easy to understand, like situational vs. existential.

Situational boredom seems like what's most important to creativity, and we're in that state, or the default mode, as much as half of the time.

Existential boredom is a feeling of spiritual emptiness. 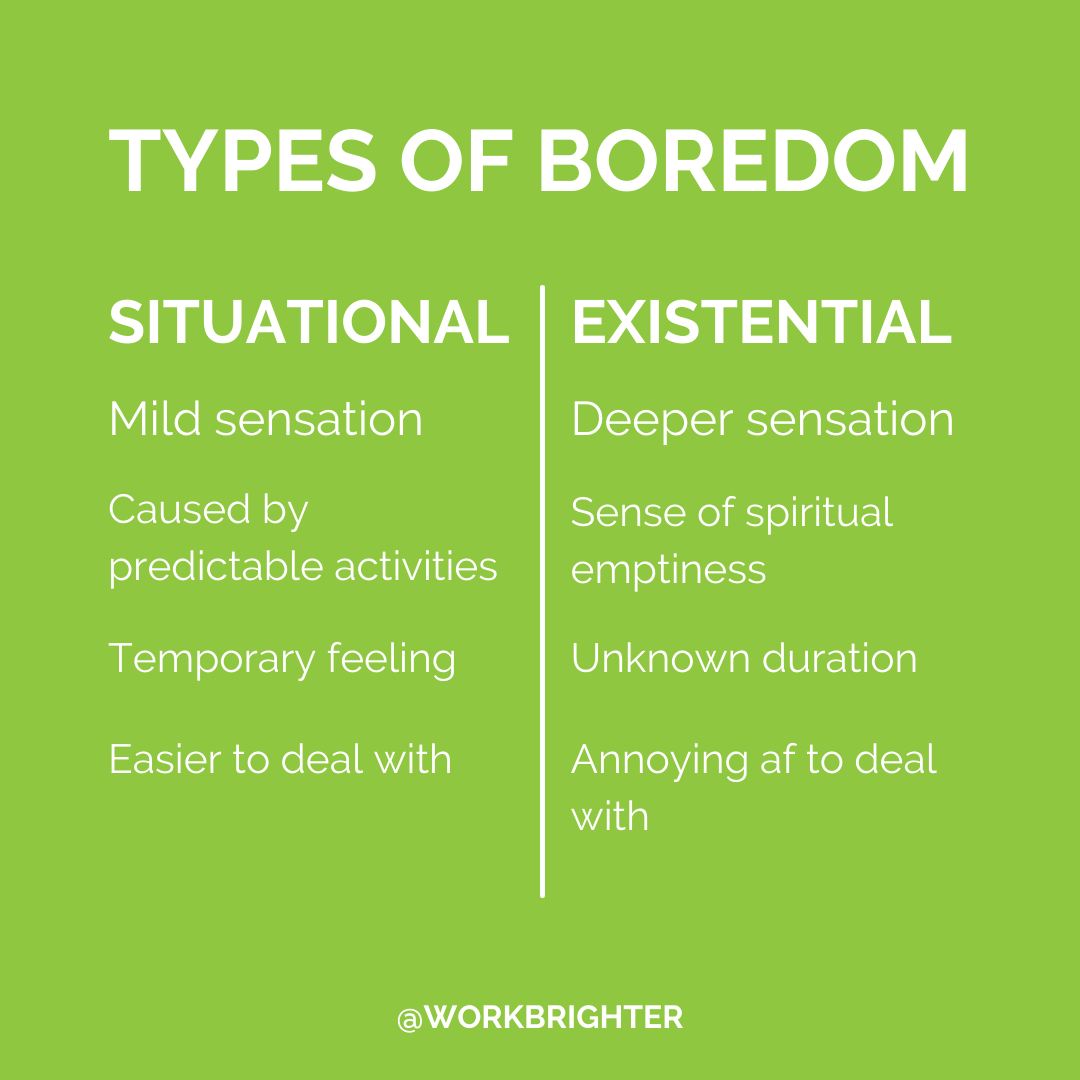 But then there's also guilty dysphoric vs. positive-constructive mind wandering, which isn't so clear.

Guilty dysphoric mind wandering is when it wanders to negative places and obsessing over the past. Positive-constructive mind wandering is more problem-solving and future-focused and what's associated with "imagination" or "creativity."

All of this is why breakthroughs happen when we're doing boring things.

Dopamine, the neurotransmitter responsible for our tech behaviors, has less to do with happiness or pleasure (as is commonly believed) than setting or managing expectations and seeking novelty.

This makes it REALLY important to creativity, but it's inhibited by our current interactions with tech since it's changing the way our brains are used to functioning. 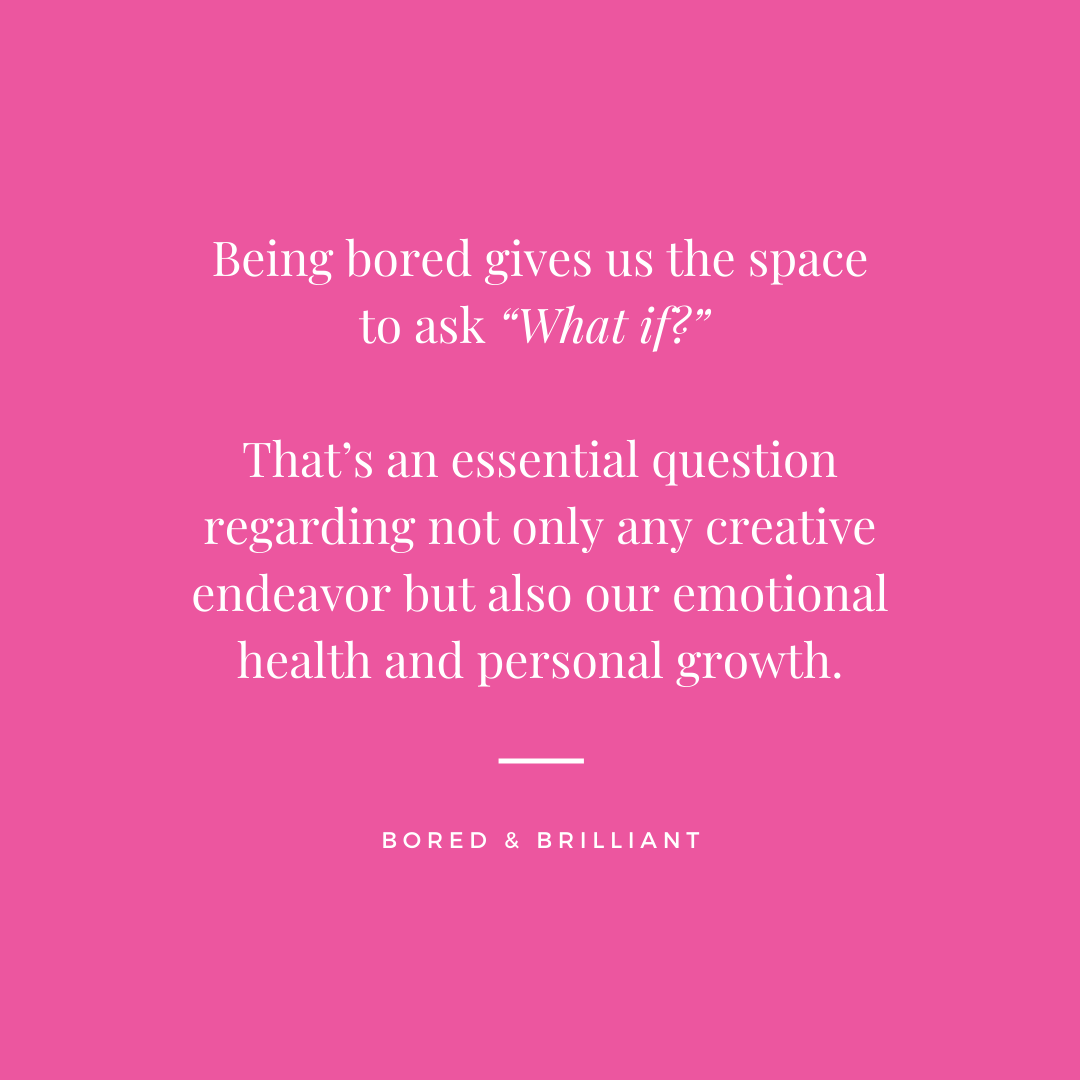 And while we like to think it's new, this has always been a problem with whatever technology was newest to society at the same time. Books and newspapers caused the same outrage when they first became widely available.

In reality, it's not about the specific technology. It's about the distraction of a new obsession.

Phone Hygiene & "Out of Sight, Out of Mind" 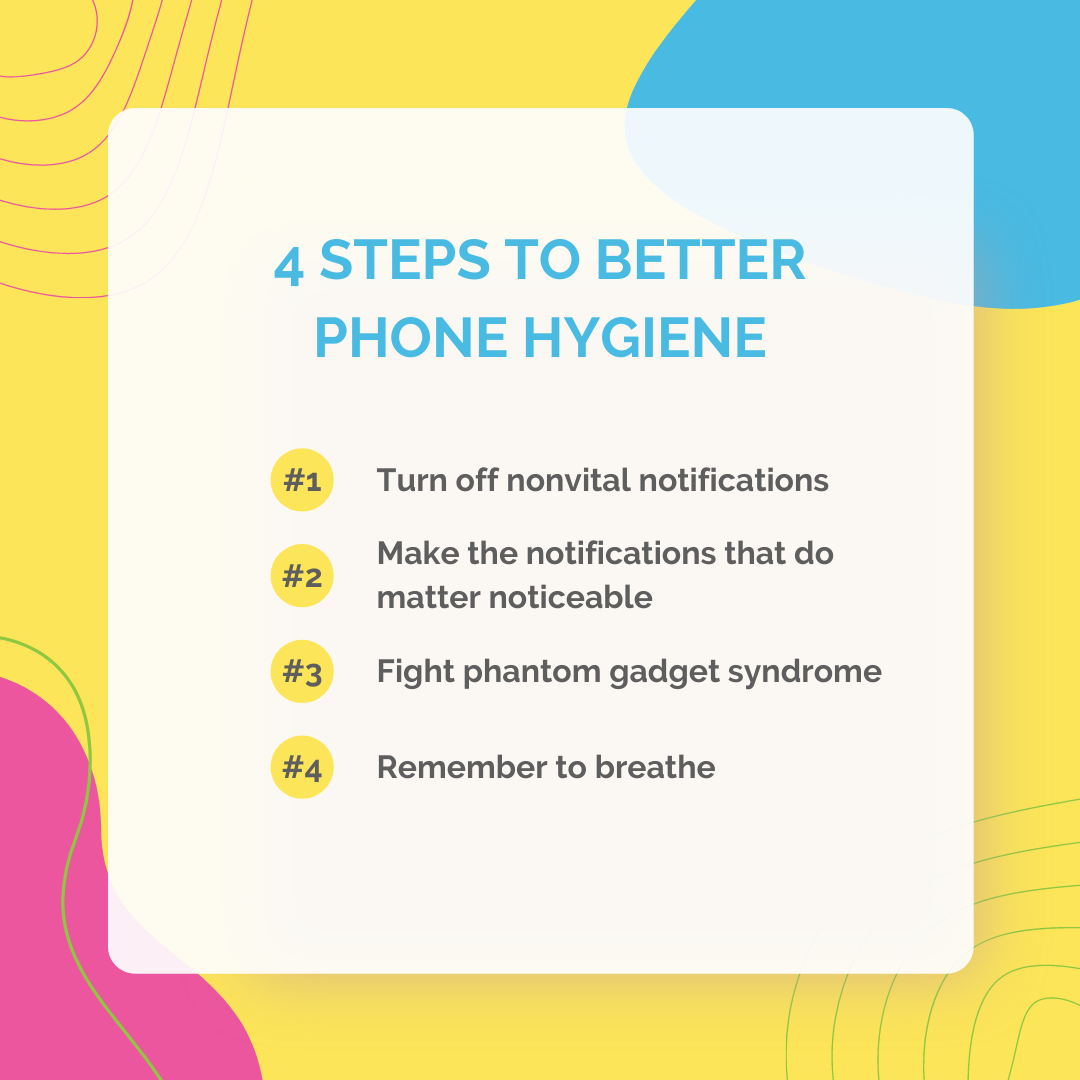 One approach to this is what Alex Soojung-Kim Pang calls "contemplative computing." His steps to "good phone hygiene," for example, are:

He also suggests putting your phone out of sight, which led to my "just out of reach" or JOOR approach to screen time management. 🤓

One thing that's talked about less related to the proliferation of smartphones is how increased photo taking—even without posting or sharing them anywhere, without involving social media—has changed our lives.

Taking a picture of something changes the way we interact with the memory of it. Your brain doesn't doesn't do as much elaborative or emotional processing around it since you've "outsourced" it.

Linda Henkel has coined this process the "photo-taking-impairment effect."

The impact of the effect also depends on whether or not you're in the picture, in which case you tend to be even more removed from the memory, like an outsider observing your life rather than experiencing it.

These days, the most common digital business model is a game to get people's attention (side note: the reason Work Brighter launched its membership as our first product was so we could avoid falling into that common trap as a digital media company).

So what is normally a useful bias to staying up-to-date and seeking novel information, gets hacked by brands and businesses. Between these interruptions and self-interruptions, the increased attention switching stresses us out.

To combat this, some in Silicon Valley are participating in a design ethics movement that gives users more control over their tech.

There's a similar movement around using video games for their benefits in the offline world like problem solving, nonlinear decision making, cognitive functions, and mental health.

Part of this movement is Jane McGonigal and her work from another book I love, Superbetter, which takes technology and gaming and applies their positive impacts more intentionally to personal development.

Solitude and boredom are essential to the creative process, business, and so many other things. One reason is that they allow for deep work, or focusing intensely without distraction.

But society today tends to overemphasize the importance of constant social interaction at the expense of it. If we're always responding, we're never processing or unplugged enough to get into deep work.

Alone time should be viewed as a sign of focus and emotional maturity, not anti-social behavior.

But that's now how it is right now, thanks to Hustle culture and its Extrovert Ideal. Especially since social tends to be defined in a "narrow and oppressive" way, according to Susan Cain (author of Quiet). Even when we're alone, we're expected to be available for communication via email, etc.

This lack of alone time inhibits processing and internalizing things in "social" situations for introverts, who make up about one-third of the population, but most of the Work Brighter community. 😝

Back on the topic of video games, part of the Bored & Brilliant thesis is reclaiming wonder by looking at more things like games, like video games.

Both tech and video games are frequently vilified, but the problem is how we use them, and we can change that.

There are ways to use tech and games for good, to set good boundaries and encourage wonder.

For example, a program called MinecraftEdu is an educational version of Minecraft used in classrooms. And there's a camp called Camp Longacre that has an "anything goes" tech policy. Smartphones are allowed, but the staff models such good boundaries and offers so many other things to do, that kids don't spend all their time on their phones.

Finally, embracing boredom requires making choices about how we spend our time instead of falling into defaults (the premise of Make Time, as well).

You notice more about your surroundings and what makes it unique, which can fuel creativity. This is how the kinds of mindfulness focused on noticing things less often can actually hamper creativity (even though they're good for other things).

And part of this includes creating routines for yourself.

Words like "routine" are associated with negativity and boredom, but boredom isn't bad and neither is a routine you actually like.

Words like "routine" are associated with negativity and boredom, but boredom isn't bad and neither is a routine you actually like.

With the current prevalent business models, the industry isn't incentivized to actually make tech good for us.

So we need to take matters into our own hands, like creating more "speed bumps" to get online.

The Bored & Brilliant challenge exercises throughout the book help you with that.