Tweet
Pin225
Share91
Share
316 Shares
The gist: workflow automation and scheduling are two of the most popular time-savers for entrepreneurs to talk about. So much so, the difference can get confusing and the lines between ’em can get blurry and confusing. 🙈 That’s why we’re laying out the breakdown in this post: what they are, what the difference is, and the best times to use each! 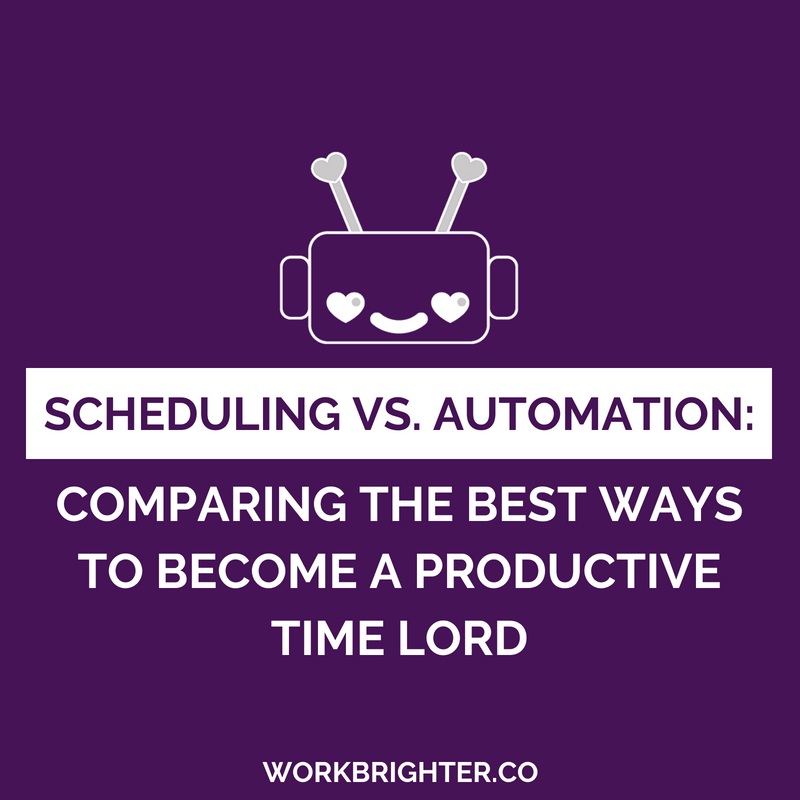 There comes a point in every solo entrepreneur’s journey where they’re like, “Oh, crap.”

They’ve finally implemented all the “lifehacks” and “workhacks” and think they can’t get any more productive.

Are you there yet?

You’re a master at efficiency.

You’ve figured out your ideal energy management, batch your tasks, and eliminate distractions.

You became a productive queen… 👑

Aaaand now you’re starting to slump. You’re not making as many improvements as before or finding as many new ways to save time.

But does that mean you’ve hit some productivity wall? 🤔

It can be frustrating to feel like you’re doing everything right and still not finding new ways to grow your business.

But there are two things you can almost always count on to make a little more room in your day. EVERY DAY.

They’re similar but different, and best used together. In this post, I’ll take you through when to do one versus the other, or nothing at all.

What do you do once you've tried all the 'lifehacks' and 'workhacks' and still don't feel productive? 🤔Click To Tweet

So, a lot of entrepreneurs use the terms “scheduling” and “automation” interchangeably or incorrectly. Let’s make sure we’re on the same page before we get too deep into this shindig.

When you schedule work, you’re completing the work for a task before that task actually “happens.” Basically, doing something in advance and setting it up to run later.

You’re manipulating time like the TARDIS in Doctor Who. And I LOVE feeling like a Time Lord. 🤓

With scheduling, you’re still performing a task every time you need it to happen. Take scheduling social media. You’re still entering in every Facebook post and tweet that gets posted, they just get posted sometime later.

But workflow and process automation…it’s a little different.

In this case, you do the work once and it happens repeatedly.

The major difference is how much work you’re putting in and when.

Scheduling lets you do a little bit of work over and over again. Automation requires more work upfront, but all the work is completed at once.

Then you set it and forget it. 🙌

A lot of entrepreneurs use the terms 'scheduling' and 'automation' interchangeably. Learn the diff and when to use each in this quick guide:Click To Tweet

Once again, scheduling is like playing with time. You put in the work for a task at one point, but it “gets completed” at another.

The most common way most solo business owners can use scheduling is by batching tasks.

Let me ask you this:

How many of the following things do you do?

Yep, those are all examples of both scheduling in general, and batching tasks specifically.

When to schedule tasks

Scheduling is best for tasks that have inconvenient timing.

For example, publishing your social media posts at strategic times would be sooooo annoying without scheduling. 🙈

You’d have to like, set alarms for all the times your audience was online, make sure you hear it and are available at ALL times, and then log in to Facebook, Twitter, etc. and bang something out the alarm when off.

They’re tasks where you still need to put in the work manually each time – there’s a level of customization required, or else you’d automate it completely. So the best tasks for scheduling are also custom or infrequent tasks.

Great tasks to schedule out

As an entrepreneur or freelancer, scheduling should be your best friend.

You have a ton of hats to wear, and it lets you wear one at a time. You batch social media, and you’re wearing the marketing hat for a few hours. Then you switch to your accountant hat for an extended period of time for billing and expenses.

When you bundle stuff together, you’re not trying to do more than one thing at a time or switch back and forth constantly.

So some of the best tasks to schedule for your business include:

They’re things that you still need to oversee and put together content for, but you can control when that work gets dripped out to its intended audience. Yay! 🙌

Automate It All With Workflow Automation

Scheduling is like “automation light.” You’re completing the work for each task, but changing the time.

With automation, you only complete the work for that first task, then it re-occurs automatically based on rules you make up.

You basically become a wizard.

You can put in the work once, and then software or tools take care of it for you every other time. Welcome to the future.

You’re living in it already if you do things like…

…then you’re already automating your business. So rock on. 🤘

When to automate stuff

Automation is best for very frequent, repetitive, and generic tasks. That means:

If both of those describe a task pretty well, it’s not worth your time long-term. Put some time in now and save more time later.

Automation is great for any solopreneur who has a lot of totally set routines. Like sending the same customer/client service response over and over. Or promoting the same blog post on social media.

We all do things that could be automated:

And even if you do automate them, you can probably take it further. We all can.

Anything that can be fully automated, should be. 🤖

The Best of Both Worlds

Now, there’s one more way to save time that I haven’t mentioned yet. Because it just combines the two we’ve already talked about.

Some tasks can be mostly – but not completely – automated. They’re pretty repetitive and generic, but do need some amount of manual work from you each time.

Say, a little bit of personalization.

Or pressing the “final trigger.”

Not all the work is done upfront, but a significant portion is.

The best way to find tasks of this type is looking at what you already schedule. Then see if there are certain parts of that process that you can automate, repeat, or template. Streamline it, dude! 🙌 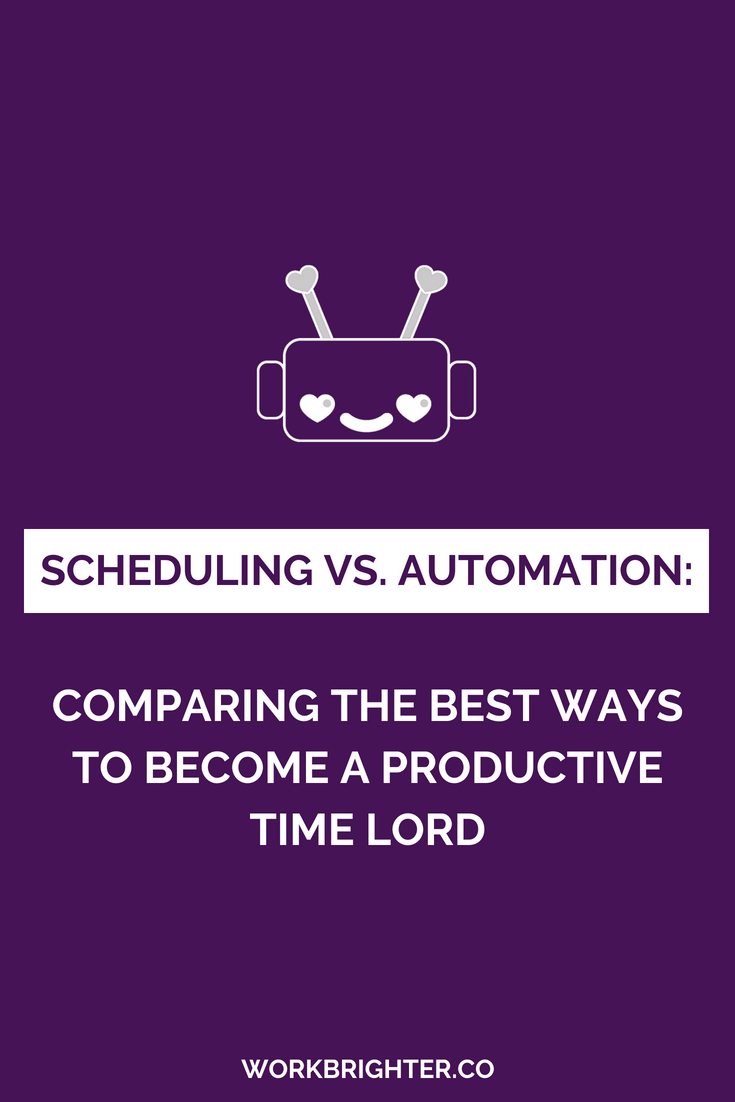 This post was originally published in March 2017 on BrittanyBerger.com