How to Write a To-Do List That’s Actionable AF

The gist: in this post, we’re talking about the key to an effective and actionable to-do list that makes it easier to be productive.

Be honest with me: how effective are the to-do lists you make yourself?

If you're not sure how to figure it out, try this:

What's the ratio or percentage there?

That's right, we're getting verby, friends. Because they are KEY to actionable, effective to-do lists.

And isn't that what to-do lists are for in the first place?

The Problem With Most To-Do Lists

You can read all the lifehack and productivity articles in the world about the "best tool" for your to-do list, but no productivity app will fix not knowing how to write an effective to-do list in the first place.

I understand the desire to spend as little time as possible writing your to-do list. To keep it brief and simple.

Because the less time you spend planning, the more time you can spend doing, right? WRONG.

Your to-do list is your instruction manual for the day.

And we all know what it’s like to put together furniture with a confusing manual (side-eying the shoddily put together IKEA bookshelf next to me 👀).

So it’s totally worth taking the extra minute or two (seriously, it’s not much time) to create a more effective to-do list.

The estimate I like to give people is that every minute you spend planning can save 5-10 minutes on the doing.

If you’ll please flash back to elementary school with me for a quick sec, you’ll recall that verbs describe actions…things that you DO.

So the secret to an effective to-do list isn’t about what app you use, or what morning or evening routine you write it during.

It’s how actionable your tasks are, and that happens through using verbs in each and every task on your task list.

That's not really a to-do list, it's a blobby list of things that may or may not exist.

But looking at it, you don't know what to DO about them, do you?

Am I sending an email, or reading some? Is that a prescription I need to ask a doctor for, call in a refill for, or go and pick up?

"Clean" is technically a verb, so there's one point for the to-do list. Although it's way too general to be helpful. What am I cleaning?

And that blog post...which part am I working on?

Because there are lots and it takes way more than one day's work to put one of these puppies together.

Samesies with an ad campaign. I can't complete either of those in a single day, so we definitely can't have both on the same list. Not in their entirety. 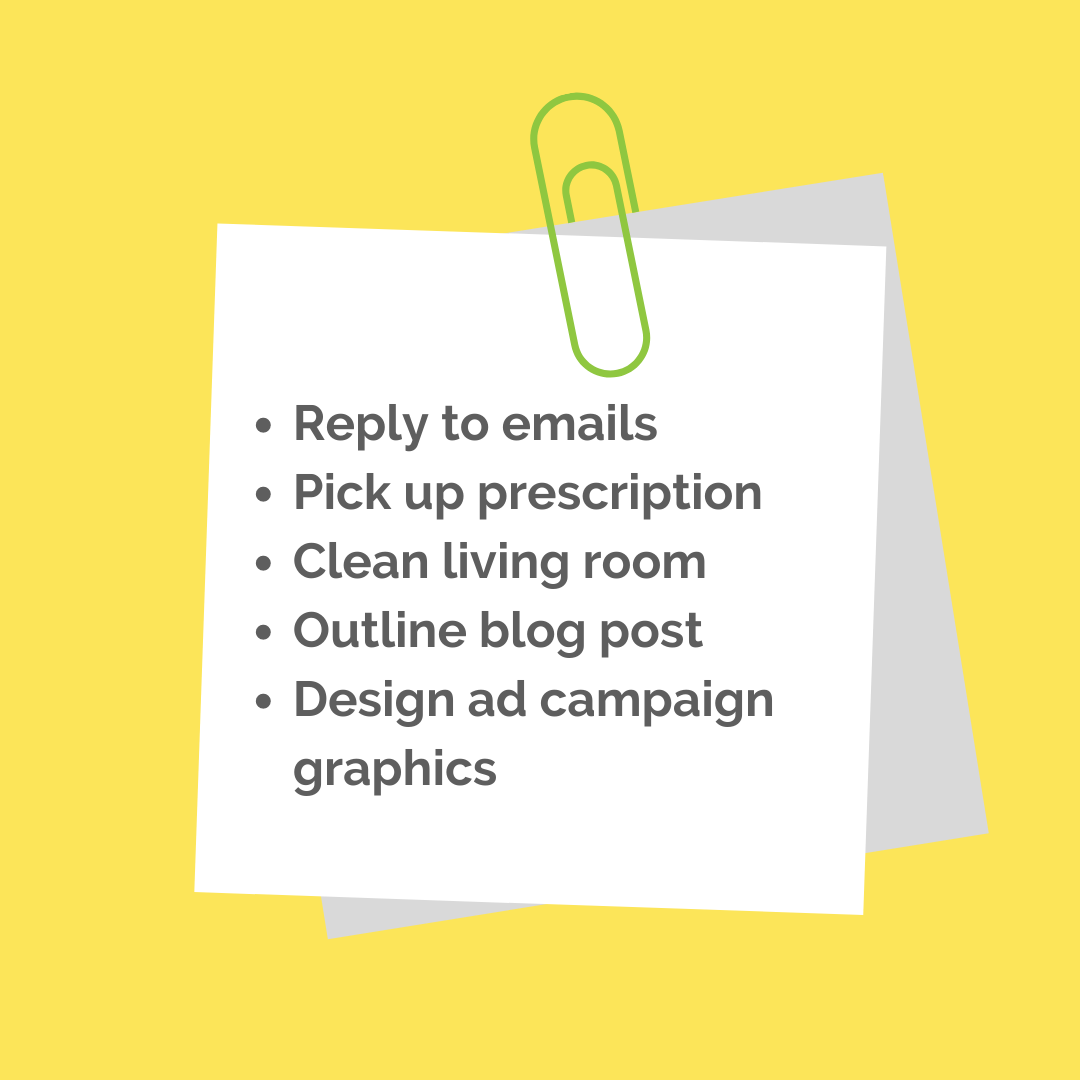 Now let's try a version of that to-do list with a verb for each item:

Can you see the difference?

How much clearer, simpler, and more manageable the second daily to-do list looked?

Without verbs, your to-do list is a vague list of things that your brain doesn't know what to do with, not tasks it knows need be completed.

When I realized this? Mind. blown.

Let’s say you created a task list for your week on Sunday night using a bigger version of that lackluster, verbless first to-do list.

Since it's all top of mind then, you look at the vague terms and know what they mean.

And you make the mistake of thinking that will always be the case.

Oooh, if only Future Us had the memory we always assume it does...

And that may be true.

But there are so many more tasks that go into a project, by David Allen's Getting Things Done terms, than we realize before we actually sit down and think about it.

But how would I tell the difference between them on a vague, verbless list that just says "blog post?"

They force you to break things down

Another benefit of making sure your to-do lists have verbs is that it forces you to break down a noun like "Prescription" or "Ad Campaign," which are projects, into the individual tasks they're made up of.

It makes your list seem much more manageable. You may not consciously notice it, but it still makes a difference.

I know I didn’t at first.

But then I noticed something:

Even though my lists became longer when I made sure to use verbs, I was crossing off more items.

More importantly, I felt like I was getting my work done more easily, and that made me happy. Happy Brittany has more fun with work.

So I ran with it. My to-do lists began getting longer and more detailed, as did the individual tasks on them:

I know I’ve seen an article somewhere (wish I’d saved it!) about how this list-making method also has some other interesting cognitive effects.

Your challenge, should you choose to accept it: start writing lists of things you need to do, instead of just things.

Every item on your to-do list should have all three aspects. I love it so much I’m about to write it on a post-it to keep on the cover of my planner. 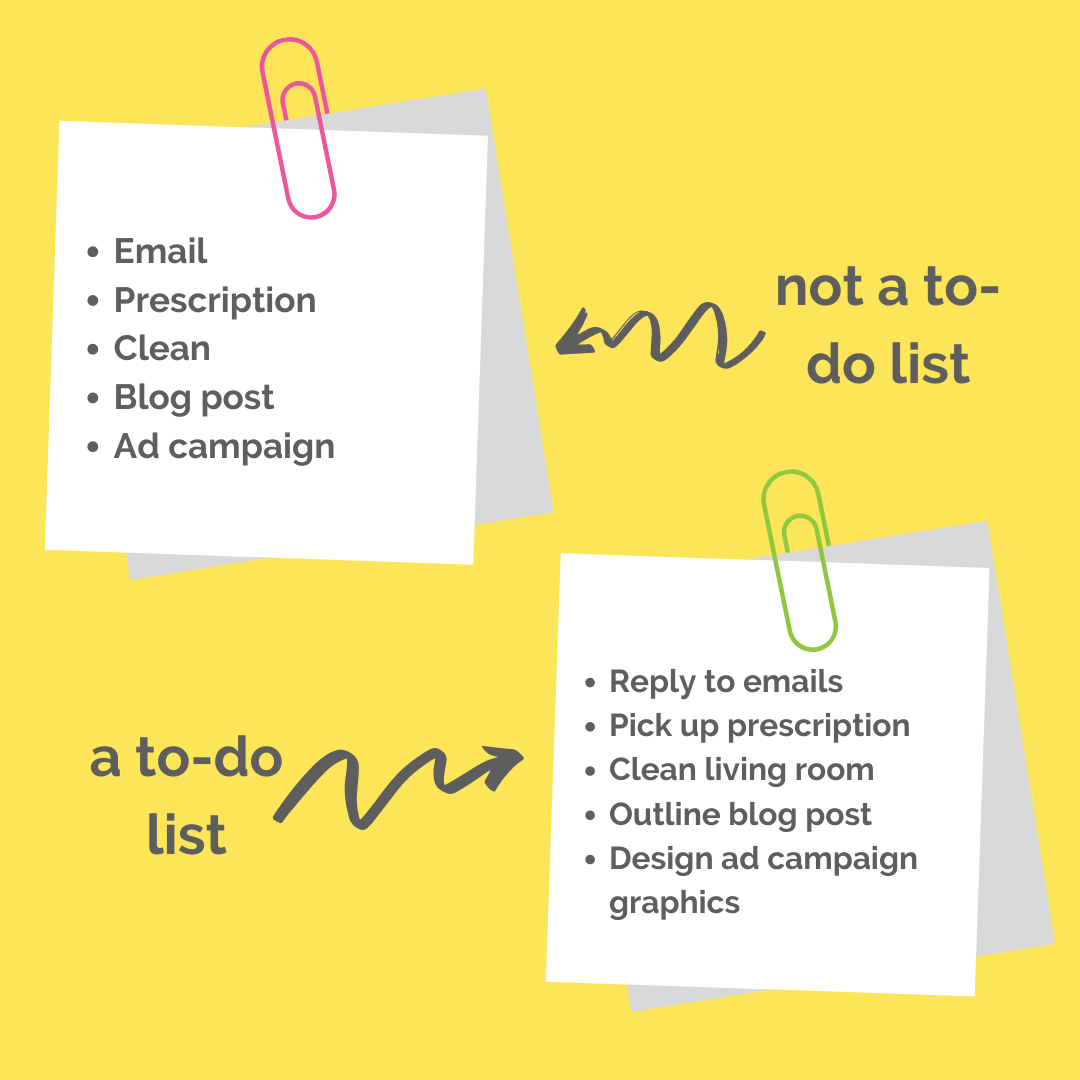 Aside from making sure your to-do list is actionable, there are a few other things you can do to make your to-do lists more effective, so you actually do the things on them.

So many people think that to-do lists just don't work, no matter what, because they've never been taught HOW to write them.

In case that's you, here are a few things to keep in mind once you've got your verbs down:

Give yourself a limit

I know that in the past I've written about how MIT to-do lists didn't for me, but I've (sort of) come around.

While I still have a big master task list in Notion of everything I should do in a day, the to-do list I write on paper each day is a prioritized version of that. It's the most important tasks, or the MIT to-do list. But to be fair to my past self, having a short to-do list without the larger task list doesn't work for me.

Try giving yourself a limit as to how many tasks you can add to your to-do list each day. Even if you have to keep a longer list elsewhere, having only the highest priorities on the list you're staring at all day helps you focus on what matters most.

You also have a better chance of finishing your to-do list when there's less on it, even without checking off more tasks. That feeling of success can provide a motivation boost.

Another way to make your to-do list more helpful, useful, and effective is to add estimates for how much time or energy each task takes.

Adding time estimates forces us to confront the planning fallacy and our time optimism. I'll often write a quick list of things I think I'll have enough time for. But then once I add in the estimates and total them up all up, it becomes clear I won't have time for everything in one day.

As for energy, hopefully you know how I feel about energy management.

Just because you have the time for something, doesn't mean you'll have the energy for it. So adding energy estimates based on what you've learned from energy tracking gives you another dimension of prioritizing and planning to make your to-do list realistic and practical.

Contexts are another concept from David Allen's Getting Things Done (can you tell I'm a fan?), where you add locations or environments to your to-do list as well as an additional dimension.

(Note: don't go and add time, energy, and context dimensions at once, these are just options. You don't want to overwhelm yourself with change.)

For example, some contexts I have in my Notion project manager include:

Contexts can help you quickly see which tasks you can do in your current environment.

For example, I can easily skim past anything tagged "With Alex," indicating I need my partner's help with something, when he's not home or busy with something else. Calls need to be done during quiet, versus when I'm listening to music or the window is open. I like to batch my offline stuff together to create long stretches where I'm not at my laptop.

All these requirements for work environments can be organized into different contexts.

Separate "have to dos" from "want to dos"

Finally, earlier I mentioned that I separate my master task list in my project manager is separate from the to-do list I write on paper each day.

If the list of everything on your plate feels so long it's overwhelming, try creating a separate MIT to-do list IN ADDITION TO, not instead of, that full list.

That way you can start the day by creating a separate list of what you have to do, you can focus on those priorities and then look at the "want to dos" once the "have to dos" are taken care of.

Is it already actionable, or do you need to make it a little more verby? Are you going to give yourself limits or try an MIT list?

If your to-do list isn't working for you, try some of the above tips instead of ditching the list entirely.

This post was originally published in December 2015 on BrittanyBerger.com and has been transferred and updated.